In this post I want to show a way of Milkyway image processing which does not require any commercial software product. The idea is to use rawtherapee, DeepSkyStacker and GIMP to develop, align and combine the frames to one final image. 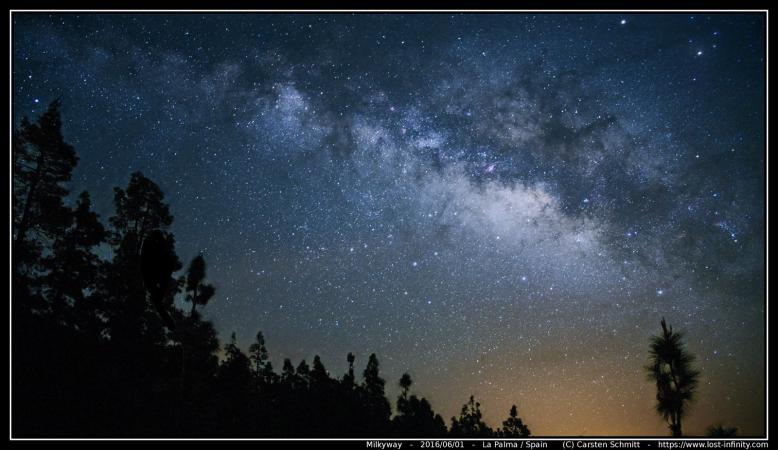 Quite often it is advantageous to use a high ISO value to get as much details as possible in the available exposure time (before the earth rotation becomes visible). On the other hand one probably does not want too much noise in the image. Therefore, the idea is to take multiple frames at a high ISO value and stack them later to reduce the noise. There is just one problem: The earth rotates and from frame to frame the stars are in different positions. Therefore an alignment of the frames before averaging is required. But then we get another problem: The foreground of each frame moves and so the resulting foreground gets fuzzy in the end. What to do?

Meanwhile there are quite a lot of websites out there which describe in detail how one can make very nice photos of the night sky – e.g. link. There is also a rich set of youtube tutorials available which show in detail how the post-processing works. Typically those tutorials focus on Adobe Lightroom and/or Adobe Photoshop.

In Photoshop/Lightroom this alignment can be done with just a few clicks. Initially I was very impressed and thought about buying those products. It turned out that those products are only available as “cloud solution” – i.e. one has to pay for example monthly for the usage. For several reasons I do not like this model – at least it does not fit my mindset. So in the end I got the required motivation to look for another solution.

Aligning manually is of course possible but it will probably take quite a lot of time since shifting and rotating every single frame is required. More or less by accident it turned out that the fantastic tool DeepSkyStacker is not only able to stack regular monochrome frames of my astro-camera but also the RGB frames (as JPEG) from an X-T1 camera.

Since DeepSkyStacker cannot handle RAW files (at least I did not get it to work), I did the RAW processing with rawtherapee and then used the resulting JPEG files as input for the stacking tool. As stacking method I chose “Average”. Since the Milkyway has quite some stars and the image resolution of the Fujifilm X-T1 is about 16 MP this process can take a while. Once finished, the correction curve has to be set accordingly and the image can be saved. The outcome of DeepSkyStacker is an RGB image with reduced noise where the stars of the Milkyway are perfectly aligned and the foreground is fuzzy.

Using GIMP to combine sharp foreground with the sharp background

The final step is to load this new image into GIMP – a free open source image manipulation program. Then open another image with a sharp background and combine both in one image in two different layers. Applying a mask the respective foreground- and background parts can be combined to virtually one image.

The image shown here is a composition of 8 single frames recorded with a Fujifilm X-T1 from La Palma (Spain) in June 2016. At that point in time the brighter (inner) part of the Milkyway (visible from the northern hemisphere) is visible from La Palma. The exposure time was 25sec. per frame. If you look closer you can already see the earth rotation – i.e. the exposure time of 25 seconds was already too long for the APS-C sensor. ISO was 1250, aperture f/2.8 and focal length 18mm.

The following comparison shows the effect of noise reduction in the Milkyway region: 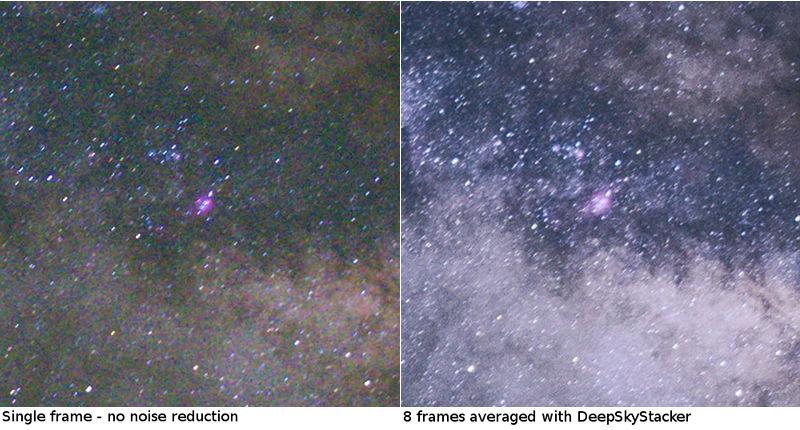 You can see that the color noise in the right image is far less obvious than in the single frame (left). This way one can create nice pictures of the Milkyway without using any commercial products.

The image is also available in full resolution here. Furthermore a set of single frames for testing can be downloaded here.