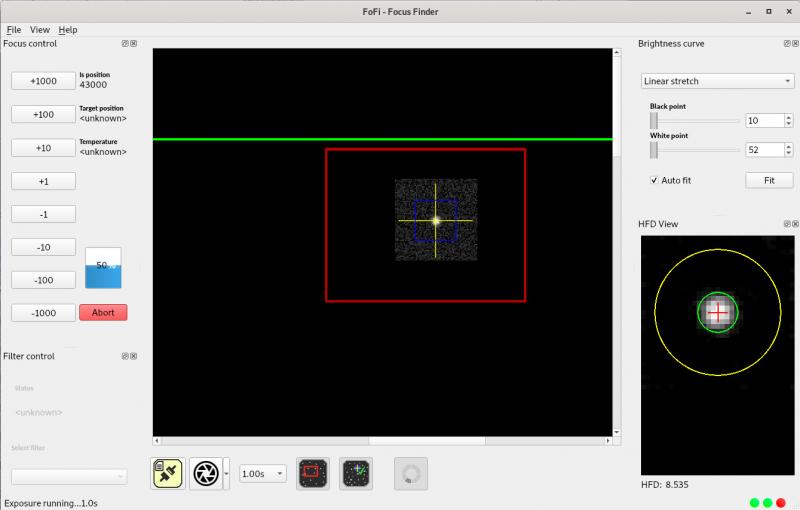 This article is about a new piece of software I developed over the past few years: A telescope focus finder software for Linux (and maybe later Windows).

At the time of publication this project is not even in ALPHA state. However, I feel now is the right time to publish it since it reached a state where at least the source code could be useful to others. You can find the source code on github here.

The software aims to support the amateur astronomer (and especially astrophotographer) with one of the most critical but also most annoying tasks: Finding the best focus position for the camera. The main goal is to provide a free and easy to use software that just does the job – automatically.

With a given configuration it should also be possible to execute “FoFi” from the command-line without requiring any user interaction. This way you can include a call to the Focus Finder into a script. This might be useful if the entire observation process should be automated and you want to re-focus from time to time to compensate the temperature drift.

END_OF_DOCUMENT_TOKEN_TO_BE_REPLACED

In this article I shown a C++ implementation of the “max entropy” threshold algorithm using the CImg library. This implementation also performs for 16 and 32 bit / float images.

First, a little bit of context: Some time ago I implemented the OTSU threshold algorithm as a pre-processing step for image binarization. I used that threshold algorithm to distinguish the noise pixels from the potential “star” pixels. This worked quite well for the high contrast input images at that time. However, for weak stars it unfortunately failed badly.

END_OF_DOCUMENT_TOKEN_TO_BE_REPLACED

This article is about finding the best possible telescope focus by approximating a V-Curve with a hyperbolic function.

A V-Curve is the result of moving the focus of a telescope from an outside focus position into the focus and then further into the same direction out of focus again. This way a V-Curve comes into existence where the focus position is on the x-axis and the focus measure on the y-axis (right figure). Probably not surprising this curve is called V-Curve since it is similar to a V. There are different ways to measure the focus – for example the “Half-Flux Diameter” (HFD) and the “Full width at half maximum” (FWHM). In this case the I use the HFD measure.

END_OF_DOCUMENT_TOKEN_TO_BE_REPLACED

This topic is in fact not so closely related to astronomy. However, from a technical perspective I think it still fits onto this blog.

Recently I was in a situation where I wanted to start a console command within the emacs shell – but directly via the command line. The xterm shell has the -e option for this purpose. Also the bash command provides the -c option. However, in emacs I was not able to find such an option. I also didn’t want to dive too deep into the LISP stuff. If you are in a similar situation the following solution might be what you need. A very small emacs LISP script will do the job:

This script first opens a new shell in emacs and then inserts the first argument passed to the script into the shell. The last line then executes the command. In the end emacs can be called the following way:

The following example calls xeyes with red eyes – this shows that passing parameters to the executable is also not a problem:

This little trick helped me a lot since navigating and especially searching inside emacs is much more convenient than in xterm (at least in my eyes).